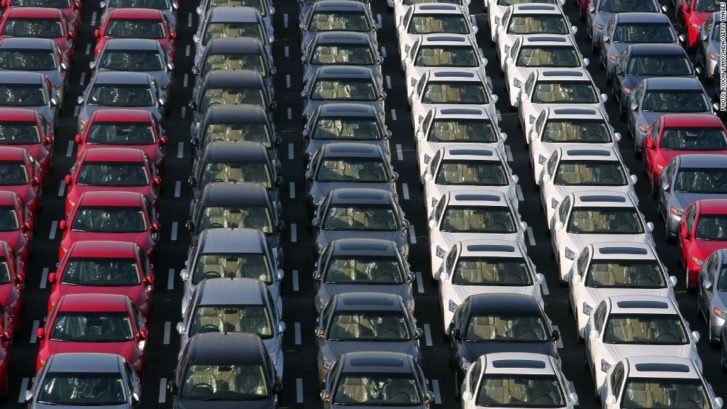 I have a friend who drives a Honda CRV. Or at least, she used to drive a Honda CRV—these days, she’s been rolling around in a variety of rental cars instead.

You see, her car was part of that Takata Airbag recall—the biggest recall of its kind. These airbags were apparently exploding upon impact, shooting metal fragments into the car and severely injuring (even killing, in a few cases) passengers and drivers.

The recall doesn’t just effect Honda vehicles—Takata had airbags in several different car brands. “Tens of millions of defective airbags” are under recall right now. And with so many vehicles effected, there simply aren’t enough parts to replace them all. So the vast majority of drivers with cars under this recall are being given rental vehicles until their airbags can be replaced.

My friend has been in hers for about 4 months now.

We were talking about it the other day, mostly in terms of what a costly event this must be. Surely, Takata will be put out of business by the damage, but plenty of dealerships are effected as well. Right now, most are having to pay for their customer’s rental cars themselves—under the hope that a settlement with Takata will result in some sort of reimbursement. My friend told me that at her dealership alone, they were paying for long-term rentals for over 250 affected customers.

It got me thinking about how sometimes in business, all it takes is one broken part to take down the entire machine.

In this case, it’s an airbag. But in the running of your business, it could be an employee—even a lower level employee—who has the ability to poison your entire corporation.

Every manager has had to deal with this situation at some point in the past; a disgruntled worker who is forever speaking poorly about management and the corporation to his or her co-workers. Or a lazy employee who somehow manages to inspire the same in those around them. All it takes is a single bad seed, one cog in the machine, to take the entire operation down.

Avoiding that outcome requires possessing the ability to not only recognize that bad seed, but to also determine how best to deal with it.

Sometimes that means assessing why this person has gone rogue in the first place. Were they always a bad employee, or have recent events set them down this path? Is it possible they are just in the wrong position or on the wrong team, and that they might thrive elsewhere? Or is there a need to restructure—pulling them out of the mix completely in the process?

The answers to those questions will be unique to each and every situation, which means that your solutions will be as well. But one of the biggest mistakes any management team can make is turning a blind eye to a faulty employee. Pretending the problem doesn’t exist won’t make it go away, and in the process of waiting it out, there might be more casualties (in the business sense, of course) than you ever could have anticipated.

One thing you can be sure of is that it doesn’t take much to dismantle the organization you’ve worked so hard to build. So don’t ignore an employee who is contributing to that environment in a negative way. Sometimes, the key to avoiding the type of fallout Takata is now facing is identifying the problem early. When it comes to management, you’ll then need to decide if there is a solution for turning that employee around, or if your best bet is to “recall” them and begin recruiting for a better fit.

Whatever you decide, the time is now!

Preserving Your Payroll. Will Using Contractors Get You into Hot Water with the IRS ?

Making the Call: What YOU Should be Looking For When Reviewing a Resume